One technique to help you avoid wiring errors is to make a photocopy of your design. Then, as you connect wire after wire, use an accent marker to color in each completed connection. Another thing you can do is to place a piece of tape or a small peel-off label indicating the unit number on each chip. Now, checking the connection U2-3 to U3-9 (or just 2-3 to 3-9) becomes quick and easy. Take your time making these connections. Most of the problems encountered in the lab are not due to bad chips (although many people tend to blame their trouble on the chips).

By far the most common causes of trouble are incorrect or missing connections. And one of the things that make it so difficult to spot a bad connection is the "spaghetti" or "ramen" approach to wiring: dozens of wires arching over the chips like a dense mass of cold, stiff noodles. This makes it hard to see where the wires go, and nearly impossible to remove a chip if one should turn out to be bad after all.

The alternative to spaghetti wiring is to cut all wires to the proper length, run them flat along the board with each bend at 90 degrees (you will have to leave room between the chips for the wires). Of course, this takes time to do and nobody wants to bother. But the savings in time and effort later when you are troubleshooting will make it all seem worthwhile. Your breadboard should come with a wire kit containing pre-cut wires with stripped and bent ends. Each of these spans an integral number of holes. Instead of bending a long wire around a corner, just insert two shorter lengths of wire at right angles to each other. Insertion and removal is done quickly and easily with a pair of tweezers or needle-nose pliers.

The search for the source of trouble begins with finding an input combination that produces incorrect output. For this input combination, check your wiring diagram and determine what the correct values should be at the inputs and outputs of each gate involved in producing the output value. With a logic probe, begin working backward from the output, checking the value on each pin and using your wiring diagram "pinout" to guide you from pin to pin.

Occasionally your logic probe fails to indicate either high or low. Possible explanations are:

A sequential circuit (made up of flip-flops, like a counter) is designed to go through a particular sequence of states. Suppose at some point it makes an incorrect state transition. The wrong way to start debugging this circuit would be to begin an exhaustive check of all connections and voltage levels. There is a more efficient, logical approach. For the sake of example, consider a 4-bit synchronous sequential circuit with D-flip-flops W, X, Y, and Z. Each time the circuit is clocked, inputs, Dw, Dx, Dy, Dz are loaded into the flip-flops. Thus the next-state values of flip-flop outputs WXYZ are the same as the present-state values of their inputs.

To locate the problem in a logical and systematic way, try the following approach:

This section is designed to be used in situations where counter outputs are used to test a circuit by applying all possible input combinations in a binary sequence. Assume the counter is triggered with a square pulse output, where the circuit output is monitored with an LED.

The map for F, derived from the equation, is below.

Now suppose that you build the circuit from the equation for F and drive it with outputs from the counter. You then record values for F as the counter goes through all 8 combinations in binary order. You insert F values into a map and get the result shown below. Since the two maps don't match, there's an error in the circuit. 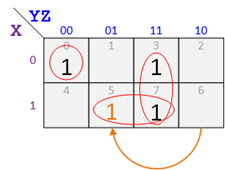 Naturally, you could check connections among all the gates to see what's wrong. But it may also be possible to find the error instead of the differences between the two maps.

Conclusion: X Y in the original expression for F is replaced by X Z, implying that Z was mistakenly connected to the last AND gate (the last term in F) instead of Y.

(This method is fairly quick if only one incorrect connection is made to an AND gate, as in this case and the next.)

So rather than over-simplify, try instead to maintain the form of the original equation if possible. Grouping the 1's as in the below map, we get F = X Y Z + Y Z + X Z.

Here the mistake was connecting X to the last gate instead of X.

A final word: efficient debugging requires practice as well as theoretical knowledge. You already have the theory, and you'll be surprised at how your self-confidence grows with a bit of practice and a few small successes. So when your circuit doesn't work as planned, don't throw up your hands. Pick up your logic probe and find the bug.