As we observed in Lab 10, flip-flops can be used to hold (remember) the state of the system. Each flip-flop holds one bit of data and can be used to represent one state variable within a system. A system that has N states will require log2N state variables and hence log2N flip-flops. If N is not a power of two, then you have to round log2N up to the nearest integer. 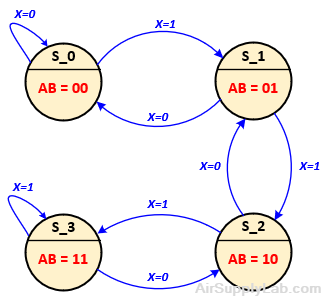 The block diagram below shows the overall design of a sequential circuit. The state register is built by flip-flops that are used to hold the state of the system. The flip-flop Q outputs represent the current state of the system or the present state. The state will change or transition on the triggering edge of the clock (in Lab 10, we learned that triggering can be a positive edge or a negative edge).

The saturating-counter example has one external input U but no output other than the flip-flop outputs AB (i.e. the state of the counter). The elevator example of Lab 10 is more complex: the state of the system would be the current floor that the elevator is on, the inputs would be the buttons on each floor pushed to call the elevator and the buttons inside that select the destination floor, and the output would be used to control the motors to make the elevator go up and down. As we will see in this experiment, where the output depends on both the current state and the inputs, the circuit is called a Mealy machine. Where it depends only on the current state, it is called a Moore machine. (The elevator would be an example of the Mealy machine.)

Notice that AX appears in both equations, so it is only necessary to create it once and then use it as an input to the circuit for An and for Bn.

In this section, you will design (but not build) a sequential circuit, or state machine, using two D-flip-flops (7474) and some gates. This will be a "Mealy" machine; i.e. a circuit whose output is a function of both current state and inputs. The circuit has an external input X, an output Y, and two state-variable D-flip-flops A and B.

The state diagram is shown below with X/Y values along with the arrows. Because this is a Mealy machine, the output Y is determined by input X as well as by the present state AB.

For example: alongside the arrow from state S_0 to state S_1, we see X=0 / Y=1. This means that with X=0, there will be a transition to state S_1 when the clock pulse comes. It also means that until the clock pulse comes and while the circuit is still in state S_0, the output Y will be 1 as long as X=0. Therefore, X is the current input and Y is the current output for any given current state. 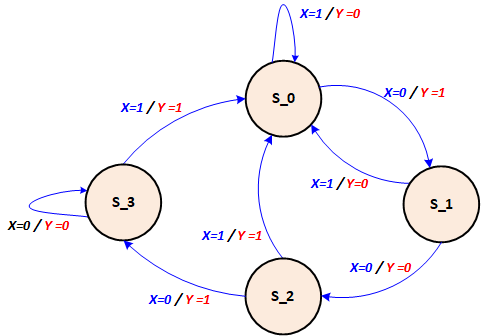 From the above state diagram, finish the state table (on your own paper). Notice in the table that each pair of rows represents the same state of AB (i.e. the same circle in the diagram).

Next, design (but do not build) the circuit. Do this with just three chips: one 7474 and 2 NAND chips. (If you need to complement A and/or B, just use inverted flip-flop outputs — there is no need to use gates as inverters. But you will need a gate to produce X .)

This section is similar to Exp#11.2 except that the sequential circuit here is a "Moore" machine — a state machine whose output depends only on the current state, not on inputs. The circuit has two D-flip-flops, A, B, an input X (from a switch), and an output Y (connected to an LED). Its state diagram is shown below.

You can think of this circuit as a primitive entry-code detector. You enter a sequence of values for input X and move the circuit from state to state. (This would be like pressing a sequence of keys in a special order to gain entry to a room, a car, or whatever.)

Here, each step involves setting input X to 0 or 1 (using a switch) and then pressing a pulser. You do this at least 3 times. If you set X to the right value each time, the state machine reaches state 3 (AB = 11). At this time, Y goes high and turns on its LED, indicating that you have gained entry. If at any point, you clock in a wrong value for X, the state machine returns to 0 where you have to try a new sequence for X.

Of course, with a real entry-code detector, if you did not know the code there would be too many possible sequences to try — here there are only 8. Also, unlike here, just pressing a key enters it; you do not have to clock it in with a pulser.

In the state diagram, you see values for X alongside the arrows, labeled X0, X1, and X2. They represent the sequence of numerical values (0's and 1's) for X that are required to get you to state 3. You will choose a sequence for your circuit. As the state diagram shows, if the complement of any required Xn (i.e. Xn) is entered, the circuit returns to S_0 (AB = 00) and waits for a new sequence to begin. Notice that once in the state S_3, the next state is S_0, regardless of X's value.

In a Moore machine, output Y is not dependent on X as it was in the Mealy machine; it depends only on the current state of the circuit S_n (AB). This is why it is placed under the state number inside the state circle, not alongside the arrows. So, in states S_0, S_1, and S_2, Y = 0, indicating that the required sequence of X's is not yet complete. When it is, Y = 1, which turns on an LED to signal that the key code was successfully entered. 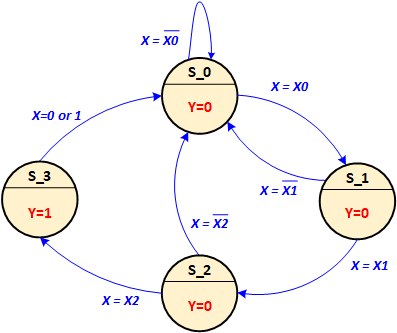 Start by momentarily grounding the clear inputs of both flip-flops to put the circuit into state 0. Then,

Repeat this test method, moving to the next state by entering the correct subsequence to get there. Then enter X for that state and return to S_0. Continue until you have checked all the states. (Of course, from state S_3 you can only go back to S_0 — there is no correct or incorrect value for X.)

Mealy example: Table 2 is similar to but not the same as the one in Exp #11.3. The values of Y depend on state variables A and B and on input X, not just on A and B (see the first two rows as an example). So this represents a Mealy machine.

Since the values of Y in each row exist at the same time as the corresponding values of A, B, and X (i.e. all in the present state), then the first 4 columns (shaded) can be treated as a simple truth table, and we can design a circuit for Y using gates but no flip-flops. (You would just fill in an 8-square K-map.)

Here we omit Y in Table 3 to concentrate on An and Bn. Using D flip-flops simplifies the next-state design. The D values are the same as the n.s. values since at the triggering edge of the clock, the D values are stored into the flip-flops and emerge as the new A and B. Since the D's exist at the same time as A, B (current state), and X, we can design circuits for them using K-maps, just like for Y.

From the K maps of Figure 11.7, we derive expressions for the flipflop inputs:

Now, suppose you build circuits for An and Bn and connect them to their flip-flops' inputs. You then supply pulses to the flipflop CLK inputs and also input a series of values for X, synchronized with the clock. 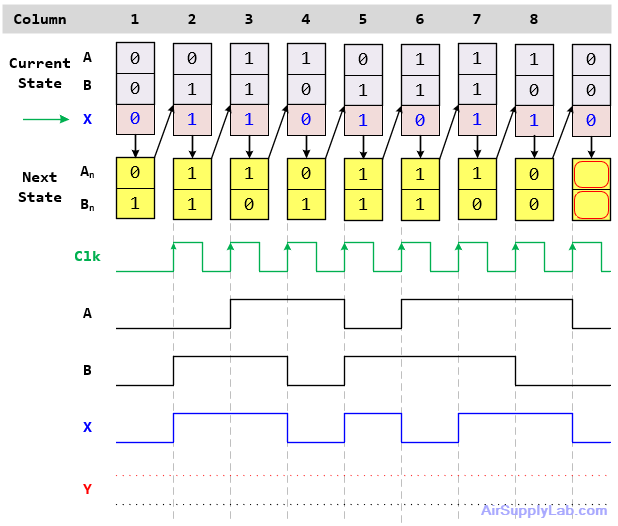 Figure 11.8: Timing Diagram of the Circuit

At the start of each present state, the circuit uses values of flip-flops A and B and an input X to generate An and Bn. This is indicated by the down arrows in the diagram. Thus, A, B, X, An, and Bn all exist at the same time. Then, when the clock pulse comes, An and Bn values are moved into their respective flip-flops and become the next present state of A and B as indicated by the up arrows. At the same time, a new value is supplied to X.

The waveforms shown below indicate how A and B change from state to state as input X assumes various values over time (assigned here at random). This illustrates the dynamics of state machine behavior.

Finally, suppose output Y was included in the circuit. In Figure 11.8 it would appear at the bottom of each column along with outputs An and Bn. Now consider the cases where A and B are the same but X is not; e.g. columns 3 and 6 (or 4 and 8). In a Moore circuit, Y depends only on A and B and not on X, so the value of Y in both columns would be the same. But in a Mealy circuit, Y depends as well on X, so its value could change.