Memories are digital storage elements that can store data and information in digital circuits. In Verilog, you can use reg variables to implement memory.

Generally, ROM is used to store constant data or CPU instruction codes. ROM can also be used to implement any truth table, as a lookup table for mathematical functions, and as a decoder. In the FPGA, the ROMs can be built

A simple ROM is a combinational circuit that maps from an input address to a constant data value. We could specify the ROM contents in tabular form, with a row for each address and an entry showing the data value for that address.

For example. we have a digital circuit block as shown below. There is no detailed circuit schematic, but there is a truth table.

The truth table can be regarded as a ROM memory; the two input variables a and b are specified as the memory address, and the contains at each address are specified by the output variables x, y, and z. The following table is the corresponding memory for the circuit. 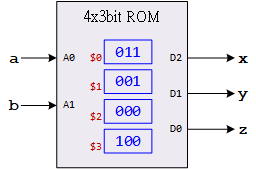 The Verilog model of the circuit is shown below:

In this example, we use a case statement in a combinational always block to implement a truth-table form of the mapping. However, we form the address from the concatenation of the a and b inputs. The case statement then specifies the output for all possible combinations of values for the address. The FPGA synthesis tool could then infer a ROM to implement the mapping.

In FPGA fabrics that provide SSRAM blocks, we can use an SSRAM block as a ROM.

However, ROM circuit structures are generally much denser than arbitrary gate-based circuits, since each ROM cell needs at most one transistor. Indeed, for a complex combinational function with multiple outputs, it may be better to use a ROM to implement the function than a gate-based circuit. For example, a ROM might be a good candidate for the next-state logic or the output logic of a complex finite-state machine.