Flip-flops are memory devices used to hold the state in a sequential logic circuit. A flip-flop can hold 1-bit of a state variable (i.e. one binary value). The output of a flip-flop, typically named Q, represents the state of the flip-flop. Usually, the complement of the state, Q, is also available at the output. There are three types of inputs for flip-flops, the clock input, the synchronous input, and the asynchronous inputs. 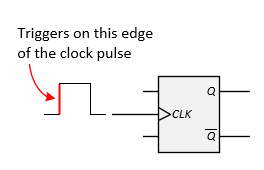 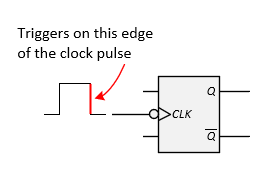 Let's look at the four types of flip-flops in more detail (note: changes in Q occur only at the triggering edge of the clock).

Below is the diagram for a 7474 dual D Flip-flop chip. 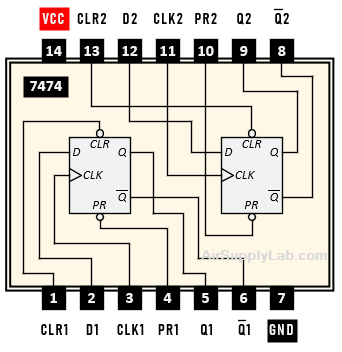 Referring to the 7474 pin assignments above, draw a wiring diagram to test the behavior of a D flip-flop.

If you use the ADALM1000 device, you have to connect

You may prefer to use ExpressSCH. You won't have to label pin numbers since all chip numbers and pin numbers including Vcc and Ground are already included in the diagram. Therefore, a power and ground table is not needed. For the clock, instead of a pushbutton switch symbol, just use a "port" symbol from the Library Symbol listing:

After you complete the wiring diagram, wire the circuit as shown in your diagram using the 7474 chip, a clock (CLK), three toggle switch (D, PR, CLR), and two LEDs (Q and Q). Test your circuit following the characteristic table shown below.

Exp #10.3 * Exploring the behavior of a dual JK Flip-flop chip

Exp #10.3 * Exploring the behavior of a dual JK Flip-flop chip

Referring to the 7476 pin assignments above, draw a wiring diagram to test the behavior of a JK flip-flop.

After you complete the wiring diagram, connect the circuit as shown in your diagram using the 7476 chip, a pulser (CLK), four toggle switches (J, K, PR, CLR), and an LED (Q). We assume that Q(t) and Q(t+1) will always be complements of their respective Qs, so they are not included in the table below. Also, there is no need to include a column for CLK since its use is implied in every state transition.

Since PR and CLR affect the circuit just as they did in Exp #10.2, you would not have to test for their effects here, which is why they do not appear in this table. However, you will use them to set Current State values as shown in the table before you clock the flip-flop. Initially, connect them both to power (inactive).

Test your circuit line by line. In each case:

According to Table 3, fill in the next state values in Table 4.

You can build a T flip-flop from a JK flip-flop by connecting both J and K inputs together. Its diagram would be similar to that in Exp #10.3, consisting of a 7476 chip, a pulser clock (CLK), and an LED (Q). Draw the wiring diagram, but instead of separate toggle switches for J and K, including the only one which will be your T input. Connect it to both J and K.

Build a circuit and verify the result

To build and test the circuit, you would go through the table line by line, activating either PR or CLR momentarily to set Q(t) to 1 or 0 as shown in this state table. You would then toggle the T switch high or low as the table indicates. And, finally, you would pulse the clock, and then, from the Q output LED, you would fill in the Next State column.

Table 6: Building a T Flip-Flop by a D Flip-Flop

But now the values in all three columns of the table exist at the present time--there is no future time (t+1) in this table. This transforms it into a truth table, one which describes a combinational rather than a sequential circuit (i.e. no flip-flops) and from which you can derive an equation for D in terms of T and Q.

Derive this equation and name the circuit element it describes. One of two inputs to this element is T (the other is ?) and its output goes to the D input of the flip-flop. Using ExpressSCH to draw the wiring diagram which incorporates the D flip-flop of Exp #10.2 along with the element you just described, as well as a pulser for CLK, three toggle switches for input T, PR, CLR, and an LED for Q.

Now build the circuit and go through the state table line-by-line, entering the values for Q(t+1) as you go.

Note: the clock is omitted from the table since it is understood that Q only changes when the clock triggers. PR and CLR are also omitted. You need not test their effects here — that was already done in Exp #10.2 — but you will need to use them to change the present state of Q as you go through the table.

Before you clock the flip-flop each time, first do the following:

Now, what if you wanted a D flip-flop, but only a T flip-flop and a gate are available. In this case, D would be the external input and T would be the flip-flop input. (Flip-flop output is again Q.)

In the table at the right, fill in values for flip-flop input T that will give the desired transitions from Q(t) to Q(t+1) required by input D. As explained at the top of Exp #10.5a, the Q(t+1) values are the same as the D values — which is why no Q(t+1) column is included. (Example: In line 2, the present value of Q(t) is 1. What should be the value of Q(t+1), and what value of T will produce it?)

Finally, derive an equation for T in terms of D and Q.