A number system is a way to represent numbers.

Ten is an important number for us humans. Most of us have ten fingers and toes, and we certainly prefer to have all ten of each. Because the fingers are convenient for counting, people started using their fingers to count from 1 to 10. It is a decimal system, which is also called a base-10 number system. Even if a lot of number systems are in base 10, humans did not always count in base 10 and we are still using other numeral bases. Here are a few examples:

If humans had 6 fingers on their hands, would we be using the Senary system (also known as heximal or Seximal) of numbers?

In mathematics, a 「base」 or a 「radix」 is the number of different digits or combination of digits and letters that a system of counting uses to represent numbers. ~Wiki~

Characteristics of the decimal number system are as follows:

In a computer, all the information is stored using digital signals that translate to binary numbers. A single bit can represent two possible states: on (1) or off (0).

Characteristics of the hexadecimal number system are as follows:

BCD (Binary Coded Decimal) is a decimal number system, where each decimal digit is represented by a 4-bit binary number.

The main advantage of BCD is that it allows easy conversion between decimal and binary forms. However, the disadvantage is that the BCD code is wasteful as the states between (1010)2 and (1111)2 are not used.

For example, give the BCD representation for the decimal numbers 90 and 873.

The BCD representation of the number 90 is written as follows:

A Gray Code is an encoding of numbers so that adjacent numbers have one single digit differing by 1. This coding technique was invented by Frank Gray, thus it is named so. The term Gray code is often used to refer to a "reflected" code, or more specifically still, the binary reflected Gray code.

Gray Code is a non-weighted code, as it does not ascribe a specific weight to each bit position. It is not used for arithmetic calculations.

Gray code is used in Karnaugh maps and in the design of logic circuits. They also find application in rotary encoders, where the predisposition to errors increases with the number of bits that change logical states between two consecutive positions.

Table1.1: Gives the Decimal, Binary, Octal, Hexadecimal, BCD, and Gray Code Representations of Numbers from 0 to 16.

Humans want to see and enter numbers in decimals, but computers must store and compute with bits. Therefore, we need to know how to convert a number into different number systems.

To convert any base-r number to decimal:

The equation for decimal to base-r number:

Convert to Binary as an intermediate step

Works both ways (Octal to Hex & Hex to Octal)

The conversion process from binary code to gray code involves the following steps: 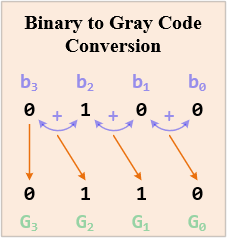 The steps given below are required to be followed in order to convert a given gray value into its binary equivalent: 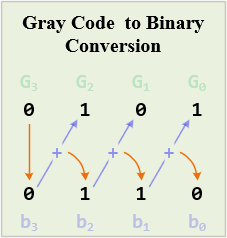 The 1-bit adder can be represented as xor logic. 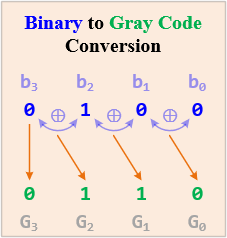 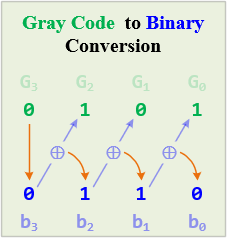 Basically, the number systems can be cataloged into two groups: decimal and binary systems.

We can easily convert numbers between decimal and binary systems. If you need to convert a BCD number to another system, such as octal, the best solution is to convert the BCD number to decimal first, then convert it to binary, and finally to octal number.

Most of the common powers of base-10 and base-2 number systems are shown as follows:

Convert the following numbers to binary:

Convert the following numbers to decimals:

Convert the following numbers to hexadecimals:

Convert each of the following Gray to a binary number:

Signed binary numbers, on the other hand, include both positive and negative numbers. the techniques used to represent the signed integers are: