The Tiva launchPad has rows of connectors along both sides that are used to connect to several electronic devices and plug-in 'shields' that extend its capability. The EK-TM4C123GXL LaunchPad has a single RGB LED on the board, and the EK-TM4C1294XL LaunchPad has four LEDs on the board. Those can be used on your embedded applications. When you first time connects the board to a USB plug, the onboard LEDs maybe already blink. That is because the boards are generally shipped with the Blink sketch pre-installed.

In this lab, we will reprogram the Tiva board with our Blink code and then change the rate at which it blinks.

Please follow Lesson 04: Operations and Operators to learn how to set up the Keil μVision IDE, create a new project, download and debug the code.

The onboard switches and LEDs for Tiva LaunchPads are as shown below:

The EK-TM4C123GXL LaunchPad comes with an RGB LED and two user buttons. Table 1 shows how these features are connected to the pins on the microcontroller. 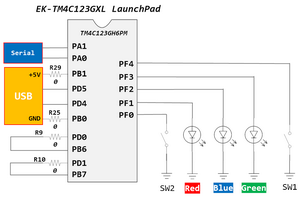 In your code, you need to configure GPIO Port F pin 1 and pin 3 as outputs.

The EK-TM4C1294XL LaunchPad comes with four green LEDs and two user buttons. Table 2 shows how these features are connected to the pins on the microcontroller. 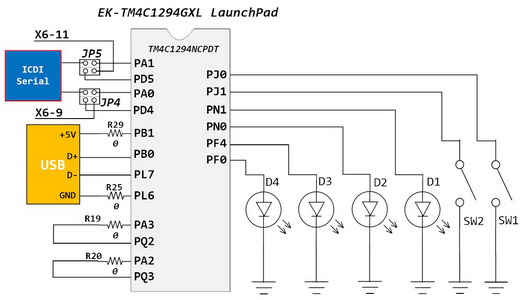 In your code, you need to initialize GPIO Port N pin 0 and pin 1 as outputs.

In this lab, you will learn how to create a C project for the Tiva LaunchPad board and configure the GPIO ports to blink the onboard LED.

* Before doing this lab, you have to study "Lesson 07: Create an ARM C Application with Keil μVision MDK-ARM" first.

Every C code must have a main() function, which is the entry point for the system. In the main() function, the line while(1) is the most popular used in an application for embedded microcontrollers. The line while(1) creates an infinite loop that never stops executing. It executes over and over and over again unless the program is intentionally stopped or there is some condition under this loop that gets met that takes out of this infinite loop.

You are now going to make the LED blink faster. As you might have guessed, the key to this lies in changing the parameter in () for the DelayMs command. This delay period is set in milliseconds, so if you want the LED to blink twice as fast, change the value from 1000 to 500. This would then pause for half a second each delay rather than a whole second.

Build the code, and then download the object code to the Tiva board. You should see the LED start to blink more quickly.

Now, add one more LED (Green LED or LED2) to the system. The system will control two LEDs. Both LEDs are lit up simultaneously, but each LED will blink at different intervals. The Red LED or LED1 should blink every 500 ms, and the Green LED or LED2 is set at 1000 ms.

You might think that you just need to duplicate the same code and then modify that code to control the second LED, such as the following:

The two LEDs will interact with each other; when one is active, the other is inactive. However, they do not act at the same time. This is an incorrect function design.


In the code, you must create two variables to store the different timer delays. To simplify the coding, we can ignore the execution time of all instructions and add a 10ms delay in the loop. If you need to delay the timer by 30ms, you must set the value of the timer to 3 to get three delay cycles (each delay cycle is 10ms).

Comment out the code inside the while(1){ } loop, then rewrite the code to complete the assignment.

Read the following datasheet for the EK-TM4C123GXL or EK-TM4C1294XL board, then find the answer to the questions