Program development can be described as a serval step process:

Planning the logic of the program requires the development of algorithms. An algorithm is a finite, ordered set of unambiguous steps that terminate with a solution to the problem. Human readable representations such as flowcharts and pseudocode are typically used to describe an algorithm's steps and the relationships among the steps.

A flowchart is a graphical representation of the steps and control structures used in an algorithm. A flowchart does not involve a particular programming language but rather uses geometric symbols and flowlines to describe the algorithm. From a flowchart, a programmer can produce the code required to compile an executable program.

Flowcharts can be an effective way to show steps in a process. But they can also be confusing and even misleading if not prepared properly.

When designing and creating a flowchart, keep in mind that the diagram needs to be easy to understand. Here are some tips for good flowchart design. Applying them will allow you to make flowcharts that are easier to read, understand, and use.

What is a flowchart?

Uses of a flowchart

A flowchart represents a dynamic process, usually with a "starting point" and one "endpoint". A block diagram is a type of flowchart. Flowcharts can intuitively and clearly represent all the steps of a dynamic process from start to finish. It is a diagram composed of graphic symbols and text descriptions.

Flowchart symbols and their purpose

Flowlines show the sequence of processes and have arrows to show the process's direction. Each flowline usually connects two blocks.

The terminator symbol marks the starting or ending point of the system. It usually contains the word "Start" or "End."

The terminal symbols, sometimes called start-stop symbols, show the Start and End points of the process.

Represents material or information entering or leaving the system, such as customer order (input) or a product (output).

A box can represent a single step ("add two cups of flour") or an entire sub-process ("make bread") within a larger process.

Processing symbols, represented by rectangles, indicating processing steps, such as arithmetic statements. A process always has exactly one input and one output.

A decision or branching point. Lines representing different decisions emerge from different points of the diamond.

Decision symbols, represented by diamonds. The label in a decision block should be a question that clearly has only two possible answers. The decision block will have exactly one input and two outputs. The two outputs will be labeled with the two answers to the question to show the logic flow direction depending upon the decision made. 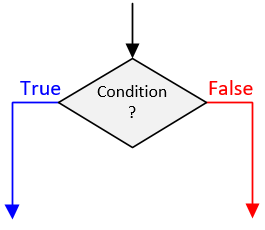 Subroutines are portions of code that run and return the execution point to the calling function. This allows you to write one subroutine and call it as often as you like from anywhere in the code. Subroutines make the code smaller and easier to test.

Connects two or more parts of a flowchart, which are on the same page.

On-page symbol: a circle with a number or letter to identify the matching transfer location. The on-page connector shows a jump from one point in the process flow to another. They are handy for avoiding flow lines that cross other shapes and flow lines. They are also handy for jumping to and from a sub-process defined in a separate area than the main flowchart. 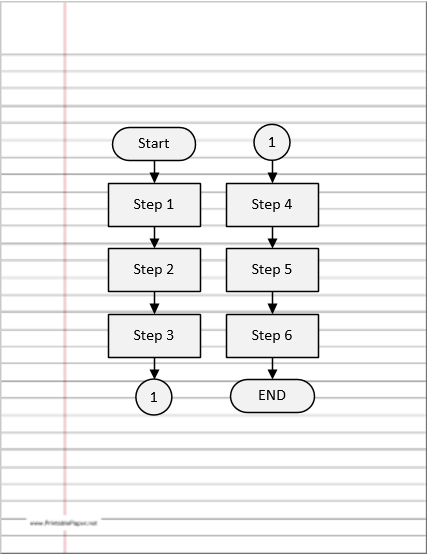 Connects two parts of a flowchart that are spread over different pages.

Off-page symbol: a square with a pointed bottom, containing a page number and a letter to identify the matching transfer location. The off-page connector shows the continuation of a process flowchart onto another page. The target page number must be added in the To symbol, and both To and From symbols have the same node letters (or number). 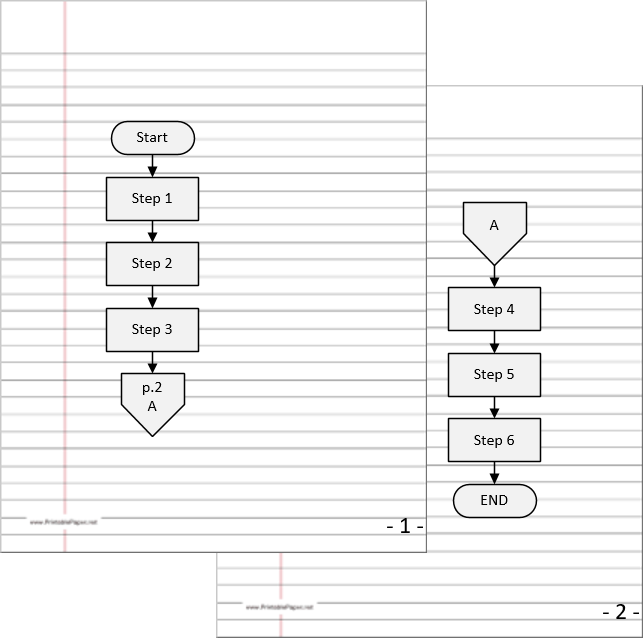 The sequence structure is just a series of processes carried out one after the other. Most programs are represented at the highest level by a sequence, possible with a loop from the end to the beginning.

In sequence structure, each block performs an action or task and then connects to the next action in order. So, action or event leads to the next ordered action in a predetermined order. A sequence can contain any number of tasks, but there is no chance to branch off and skip any tasks or actions. Once you start a series of actions in a sequence, you must continue step-by-step to execute each action until the sequence ends. When run, the program must perform each action in order with no possibility of skipping an action or branching off to another action.

There are two types of selection structures that can be used to achieve different outcomes.

The if-else structure is a two-alternative decision — actions are taken on both the true and the false sides. 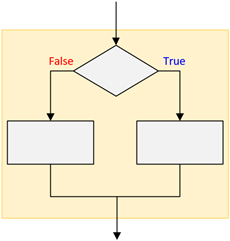 Sometimes, you may only want to perform an action or set of actions if a condition is true but do nothing special if it is false. This could be flowchart as follows: 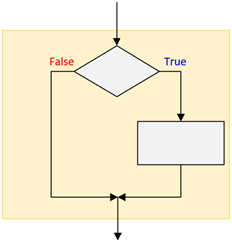 The case structure represents a serial of if-else structures that compare the same variable with different expression values. 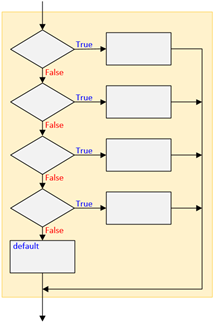 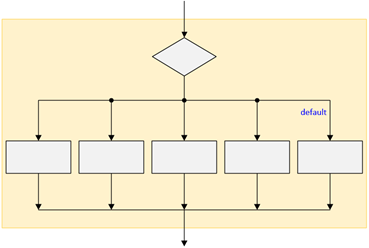 The loop structures, also called repetition or iteration, repeat a set of actions based on the answer. In other words, it can repeat the same actions over and over again until the condition is false.

There are two types of loop structure: 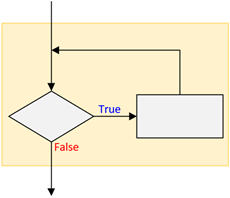 The structured program mainly consists of three types of elements: 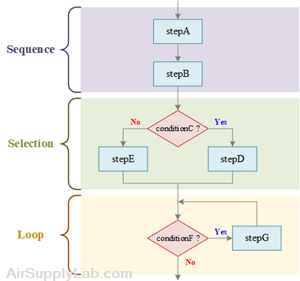 if conditionC is true then
do stepD
else
do stepE
endif

Flowchart Showing a Sequence Nested within a Selection

Flowchart Showing a Sequence Nested within a Selection 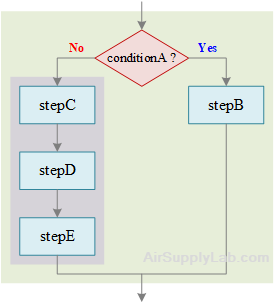 Selection in a Sequence within a Selection

Selection in a Sequence within a Selection 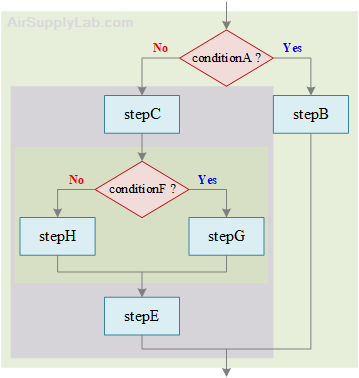 if conditionF is true then
do stepG
else
do stepH
endif 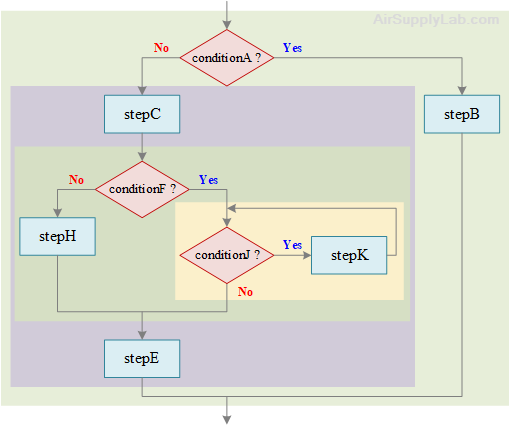 if conditionF is true then

else
do stepH
endif

The following figure shows an example of a properly and improperly structured flowchart. The unstructured flowchart is an example of what can happen if a program is written first, and then a flowchart is created to represent the program. This type of unstructured flow is often called 'spaghetti' programming and normally has elements of its structure impossibly intertwined around other elements. A program of this sort is complicated to understand, implement, debug, and maintain. 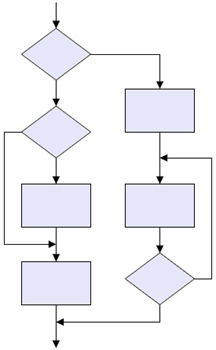 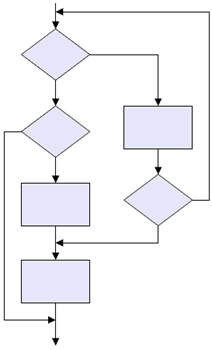 You are designing a program to ask users to put an integer number. If the number input is 0, then stop the program; otherwise, calculate the doubling value and display it on the screen. Then repeat the procedures again.

According to the question, you may draw the flowchart as below. Then, you have to think: Is this flowchart structured? 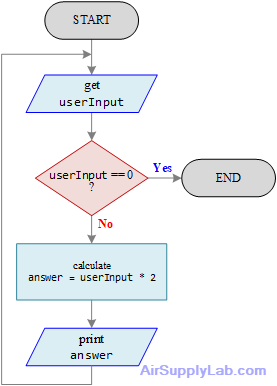 The flowchart in Figure 4.3 may not be easy to tell it is structured or not. Reorganize the flowchart as below, then you will find that the flowchart does not look exactly like any basic structured flowcharts discussed in 1.2 Followchart Structures. 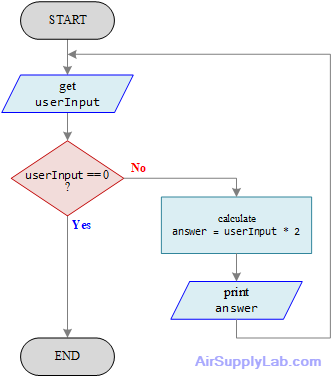 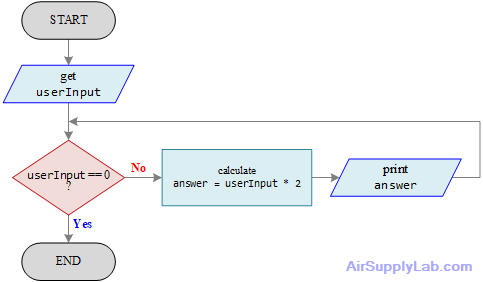 Let us follow the flowchart in Figure 4.5 to run the program. Assuming when the program starts, the user enters 10 for the value of userInput. Ten is not equal to zero, so the number is doubled, and 20 is printed out on the screen. Then the question userInput equal to zero is asked again. It can not be false, because the logic did not go to the get userInput block, the value of userInput never changed. Therefore, 10 is doubled again and the answer 20 prints again. This goes on forever, with the 20 being printed repeatedly. The program logic shown in the above diagram is structured, but it does not work. 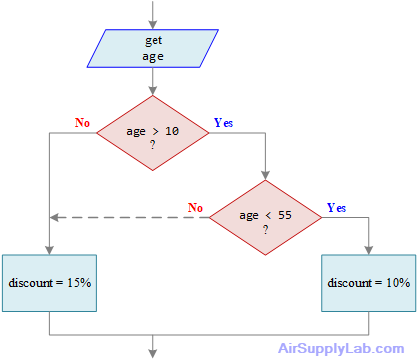 Is the flowchart segment in Figure 4.7 structured?

No, it is not constructed from the three basic structures. There are two flowlines pointing to the same processing block (discount = 15%)  from different selection structures, that must be untangled.

Follow the line on the left side of Question (age < 55), just untangle it by repeating the step that is tangled. The result is the flowchart shown in Figure 4.8. The entire flowchart is structured — it has a sequence followed by a selection inside a selection. 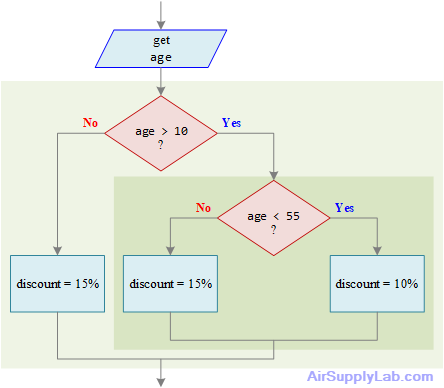 The flowchart in Figure 4.9 is neither a while loop (that begins with a decision and, after an action, returns to the decision), nor a do-while loop (that begins with an action and ends with a decision that might repeat the action). Instead, it begins like a while loop, with a process followed by a decision, but one branch of the decision does not repeat the initial process; instead, it performs an additional new action before repeating the initial process. 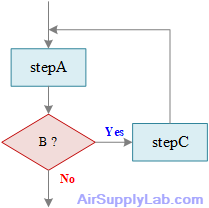 Figure 4.10 shows the same logic as Figure 4.9, but now it is structured logic, with a sequence of two actions occurring within the loop. Does this diagram look familiar to you? It uses the same technique of repeating a needed step that in [Flowchart of Number-Double Problem] 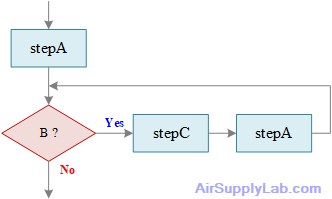 Figure 4.10: Sequence and Structured Loop That Accomplishes the Same Tasks as Figure 4.9

1.5 Flowchart on the Design of Algorithms

1.5 Flowchart on the Design of Algorithms

Basically, the design of an algorithm must satisfy the following criteria:

Generally speaking, the algorithm of any problem is nothing more than three steps: (1) input data, (2) process data, (3) output results.

Steps to Design a Flowchart Diagram

Using an online flowchart website to draw the following flowcharts, export as PDF file then submit it before the due. (Do not hand draw any flowcharts.)

* Draw the flowchart on the left, including comments and arrows.

Q02:Match the elements of a flowchart

Q02:Match the elements of a flowchart

Match the elements of a flowchart and their purpose of use in the following:

For each of the unstructured flowcharts as below, redrawn in such a way that the logic remains the same but is structured. Also, highlight the different types of structures. Do not hand draw any flowcharts. 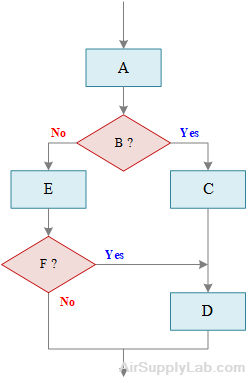 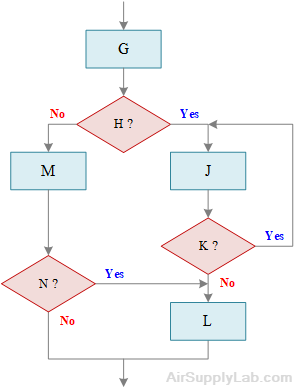 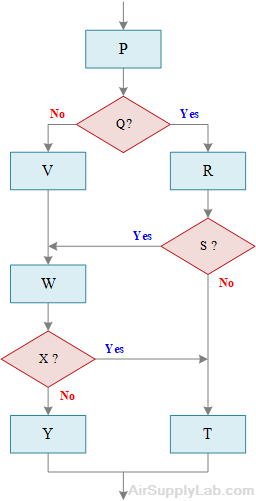 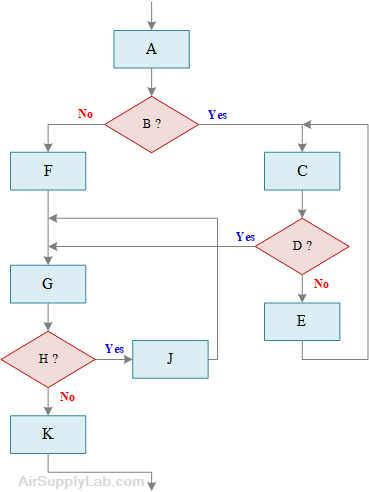