If a system functionality is where outputs depend on the order in which input events occur, or input events that occur at different times (states) will cause different output, then these models are called "Time-Ordered Behavior". For example:

State machines are perhaps the most effective method for capturing Time-Ordered Behavior for embedded systems. A state machine has several components:

The following tools are used to describe the time-ordered behaviors:

There are two models for incorporating actions into state machines:

Moore and Mealy state machines have their own advantages and disadvantages. But one of the great advantages of both is that they are not mutually exclusive, and these two models can be used together in the system.

The interior of the Moore state machine consists of three blocks:

The state diagram of a Moore state machine is shown below: 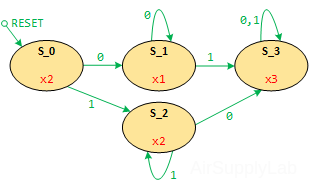 The state transition table of the above Moore state machine is shown below:

The output of the Mealy State Machine is the function of the present state as well as the input.

The state diagram of a Mealy state machine is shown below: 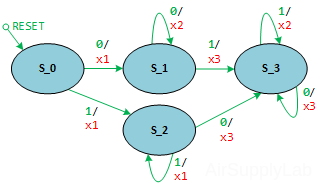 The state transition table of the above Mealy state machine is shown below:

What are the difference between Moore and Mealy state machines? The following table shows the point the differences from a Moore machine to  a Mealy machine:

The state machine for a stoplight controller is shown in Figure 5.

A state diagram can be implemented in three main ways: Nested Switch, the State Pattern, and State Tables.

Nested Switch is a simple way to implement a state machine in C. It keeps all the logic in one place, but the code can be hard to read when there are a lot of states and transitions. It is possibly more secure and easier to validate than the other approaches.

The State pattern implementation potentially spreads the logic over several separate classes, which may make understanding it as a whole a problem. On the other hand, the small classes are easy to understand separately. The design is particularly fragile if you change the behavior by adding or removing transitions, as they're methods in the hierarchy and there could be lots of changes to the code. If you live by the design principle of small interfaces, you'll see this pattern doesn't really do so well. However, if the state machine is stable, then such changes won't be needed.

The state tables approach requires writing some kind of interpreter for the content (this might be easier if you have a reflection in the language you're using), which could be a lot of work to do upfront. As Fowler points out, if your table is separate from your code, you could modify the behavior of your software without recompiling. This has some security implications, however; the software is behaving based on the contents of an external file.

State machines are a very useful programming model, especially when the system needs to act according to its history (state) and the environment (event). Implementing code using a state machine is very difficult to maintain because the system reacts differently depending on the state and event. Therefore, good documentation is very important.

Maybe you will confuse state machines with flowcharts. The most important difference between state machines and flowcharts is that the state machines perform to next actions (state) only in response to explicit events, they are event-driven. In contrast, flowcharts do not need to be triggered by events; they are used to describe the progression of the task from beginning to end, step by step. 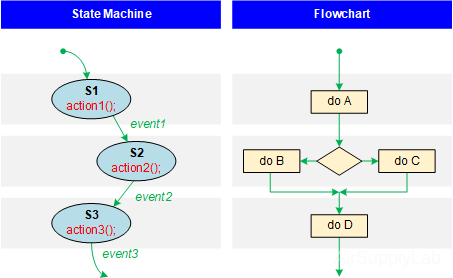 When you design a state machine, you have to constantly think about available events (inputs). In contrast, events are not the first concern for flowcharts, but procedures.