Pulse-Width Modulation — What is it?

A good definition of Pulse-Width Modulation (PWM) is already in the name itself. It means modulating/varying the width of the pulse only, not the frequency. In the digital control system, PWM is used to control the amount of power sent to a device. Therefore, the PWM is a very effective technique for controlling analog devices using the digital outputs of a microcontroller. It is widely used in many fields, such as measurement, communication, power control, and transformation.

A PWM signal consists of two main components that define its behavior: a duty cycle and a frequency. 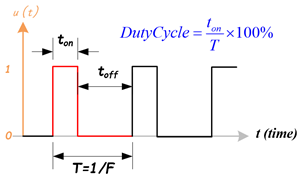 In the digital system, PWM is the method to produce variable voltage using digital means. Typically, a digital system only has two output voltages, the high (5V, 3.3V … etc.) or the low (0V). But, how it is possible that a digital system can produce a voltage that is between the high and low voltages? Here, we use mathematics to analyze the PWM signal and the average output.

PWM uses a rectangular pulse wave whose pulse width is modulated resulting in the variation of the average value of the waveform. Consider a waveform such as shown in figure 2. 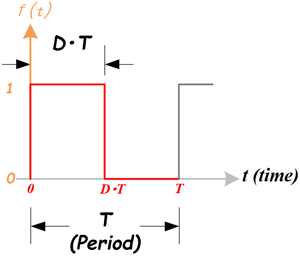 The pulse signal is f(t) with period T and a duty cycle D (0.0~1.0). The average voltage of the waveform is given by:

From this, it is obvious that the average value of the signal is directly dependent on the duty cycle D.

There are a couple of types of PWM, and they can be classified in different ways.

There are two kinds of PWM signals: Symmetric and Asymmetric. 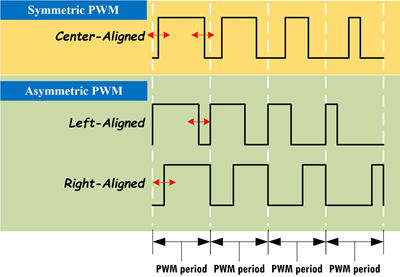 The PWM signal can be classified by signal alignment in four different types:

The basic idea to generate a PWM signal is to use a counter (or timer), a CMP (compare) value, and a digital output pin. The counter continuously counts up or down and is compared with the CMP value. The digital output (PWM) will be changed when the counter matches the CMP value, or when the counter resets. It can be implemented by software or hardware. Most microcontrollers already have hardware modules that can generate PWM signals after initializing the registers.

The PWM timer in the microcontroller runs in one of two modes: Count-Down mode or Count-Up/Down mode.

To create the Right-Aligned PWM, the PWM timer still runs on counting-down mode

A dual-edge PWM uses two different aligned PWM, one is right-aligned and another is left-aligned. Those two PWMs are connected to an AND gate, the output is the dual-edge PWM signal.