If your embedded system only needs to display numbers, you can consider using a seven-segment display. The seven-segment display is a simple device. It has 8 LEDs (the decimal point is the 8th) and can be lit in different combinations to represent the Arabic numerals and some English characters.

The segments of a seven-segment display are referred to by the letters A to G, and an optional decimal point (an "eighth segment", referred to as DP) for the display of non--integer numbers. 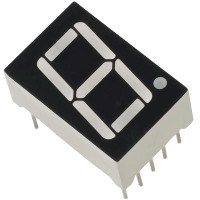 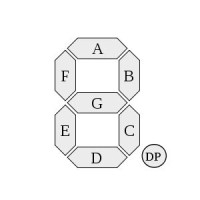 There are mainly two types of seven-segment displays available. In a simple LED package as shown in the figure above, typically all of the cathodes (negative terminals) or all of the anodes (positive terminals) of the segment LEDs are connected and brought out to a common pin; this is referred to as a "common cathode" or a "common anode" device. Hence, a 7 segment plus decimal point package will only require nine pins, though commercial products typically contain more pins, and/or places where pins would go, in order to match standard IC sockets.

In a common anode display, all the positive terminals (anode connections) of the LED segments are connected together to logic "1", or Vcc on pin 3 and pin 8. To turn on an individual segment, you ground one of the pins with a suitable current limiting resistor to the cathode of the particular segment (a ~ g).

In a common cathode seven segment display, all the cathode connections of the LED segments are joined together to logic "0" or ground on pin 3 and pin 8. To use this type of display, you need to connect ground (GND) to pin3 and/or pin 8 and connect "HIGH" or logic "1" signal via a current limiting resistor to forward bias the individual Anode terminals (a ~ g).

In general, common anode displays are more popular than common cathode displays, since logic circuits can sink more current than they can source.

How to display a number on the seven segment display?

Depending upon which character will be displayed, the particular set of LEDs is forward biased.

A single byte can encode the full state of a 7-segment-display. The most popular bit encodings are gfedcba and abcdefg, where each letter represents a particular segment in the display. In the gfedcba representation, a byte value of 0x06 would (in a common anode circuit) lit up segments 'c' and 'b', which would display a '1'.

Hexadecimal digit can be displayed on a seven-segment display. A combination of uppercase and lowercase letters is used for letters 'A' to 'F'; this is done in order to obtain a unique, unambiguous shape for each hexadecimal digit (otherwise, a capital 'D' would look identical to a '0' and a capital 'B' would look identical to an '8'). Also the digit '6' must be displayed with the top bar lit to avoid ambiguity with the lowercase letter 'b'.

The following table applies a common cathode seven segment display device. If you are using a common anode, the values in the table must be inverted.

When you connect seven segment displays in a circuit, a current limiting resistor must be wired in series with each display segment. Any resistor value between 100Ω and 1KΩ will work for the LED resistor. The lower resistance will result in a brighter segment. It is best to use resistors of the same value so all the segments light up evenly.