LCDs (Liquid Crystal Displays) are passive or active-matrix displays that can demonstrate information as text or in a dot matrix pattern. This type of  technology is generally less expensive than VFD or OLED display technology. There are two major types of LCD Modules: standard character and graphic LCD module displays. We can display text and numeric data using a character LCD module and images using a graphic LCD module. The character LCD modules are ideal for displaying characters such as text and numbers. They consist of little rectangles where each character is displayed. Each rectangle is an 8X5 grid of pixels. The graphical LCD has one big grid of pixels (i.e. 128X64) and usually, it is used for displaying images. Graphical LCDs tend to be larger, more expensive, difficult to use, and need many more pins.

Character LCDs use a 16 contact interface, commonly using pins or card edge connections on 0.1 inch (2.54 mm) centers. Those without backlights may have only 14 pins, omitting the two pins powering the light. The figure below shows the LCD module and the pinout. 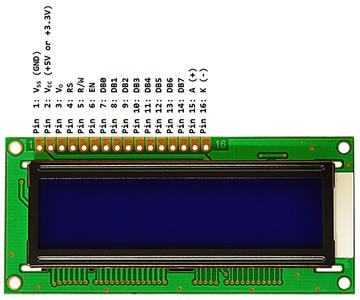 (*1) The control pin RS determines if the data transfer between the LCD module and an external microcontroller is actual character data or command/status.

(*2) The R/W pin is optional due to the fact that most of the time you will only want to write to it and not read. Therefore, in general use, this pin will be permanently connected directly to the ground.

The character LCD module can work on 4-bit or 8-bit mode.

The major difference in 4-bit and 8-bit mode lies in data pins used and LCD initializing commands. In 4-bit mode, only four data pins are used. Character 8-bit ASCII value is divided into two 4-bit nibbles. High nibble is sent first following by the lower nibble. In contrast in 8-bit communication, an 8-bit ASCII value of a character is sent at a single time period and displayed on the LCD. Thus the 4-bit mode generates latency. Although 4-bit mode generates latency it, on the other hand, saves 4 GPIO pins. Which can be utilized elsewhere.

Selecting 4-bit or 8-bit mode requires a careful selection of commands. There are two primary considerations. First, with D3-D0 unconnected, these lines will always appear low (0b0000) to the HD44780 when it is in 8-bit mode. Second, the LCD may initially be in one of three states:

State3 may occur, for example, if a prior control was aborted after sending only the first 4 bits of command while the LCD was in 4-bit mode.

The following algorithm ensures that the LCD is in the desired mode: