Capacitors are a simple passive devices that can store an electrical charge on their plates when connected to a voltage source, much like a rechargeable battery. There are many different kinds of capacitors available, from very small capacitor beads used in resonance circuits to large power factor correction capacitors, but they all do the same thing, they story charge.

The capacitor is a fundamental component for influencing the behavior of electronic circuits. It has applications in analog and digital circuits and at voltages from less than one volt to several thousand volts.

Designers have a variety of capacitor technologies at their disposal, differentiated primarily by the type of dielectric. This influences key aspects such as the capacitance value and size (volume) of the device, as well as energy efficiency. When combined with critical dimensions including the thickness of the dielectric, the capacitor's maximum voltage rating, and insulating capability can also be affected. 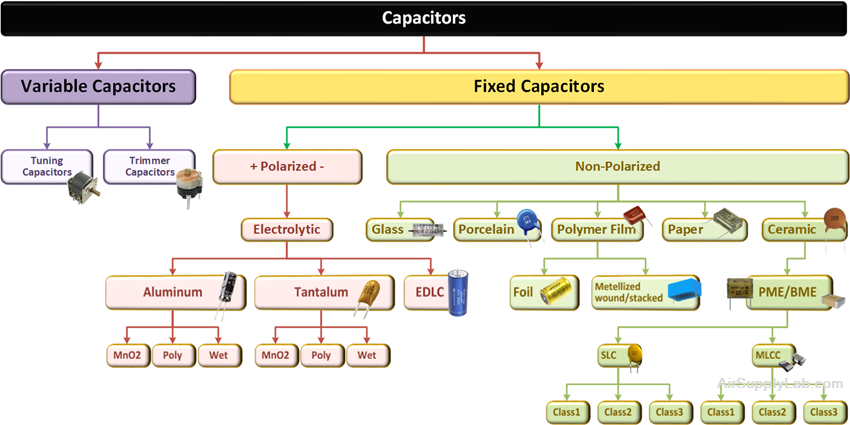 Variable capacitors are pretty much just as they are named, and their capacitance can change by physically or electronically moving the plates.

Tuning capacitors are a popular type of variable capacitors. They contain a stator, a rotor, a frame to support the stator, and a mica capacitor. The stator is a stationary part and the rotor rotates by the movement of a movable shaft. The rotor plates when moved into the slots of the stator, they come close to form plates of a capacitor. When the rotor plates sit completely in the slots of the stator then the capacitance value is maximum and when they don't, the capacitance value is minimum.

Tuning capacitors are commonly used in radios where you tune into a radio station. Originally, radios had a knob that could be turned changing the distance between the capacitor's plates.

Trimmer capacitors are varied using a screwdriver. Trimmer capacitors are used in the calibration of equipment after it has been manufactured. They are commonly located on PCB (Printed Circuit Board), and if there is any variation in their capacitance over time, they can be adjusted, but they are only designed to be able to handle a few adjustments. They commonly hold 100 volts, but some can go up to 300 volts.
Polar and Non-Polar Capacitors

One of the main distinctions between various types of capacitors is whether they are polarised or not. The use of polarity and non-polarized capacitors is determined by whether the nature of the dielectric is reversible.

Some of the more popular types of polarised capacitors include aluminum electrolytic and tantalum. These are marked to indicate the positive or negative terminal, and they should only be operated with a voltage bias in this direction — reverse bias can damage or destroy them. As capacitors perform many tasks like coupling and decoupling, there will be a permanent DC voltage across them, and they will pass only any AC components.

The other form of the capacitor is a non-polarised or non-polar capacitor. This type of capacitor has no polarity requirement, and it can be connected either way in a circuit. Ceramic, plastic film, silver mica, and many other capacitors are non-polar or non-polarized capacitors.

How to Select Non-polarized Capacitors

Non-polarized capacitors are very convenient to be selected and used. You can directly select the capacitors with the same model and the same specifications. If none of the above conditions are met, you can refer to the following methods:

The most prevalent use of capacitors is to decouple a system, such as an integrated circuit, from sudden changes, including transfers of energy, within the power supply. Connecting a decoupling capacitor between supply voltage connection and ground in an Integrated Circuit (IC), close to the IC itself, helps maintain a stable voltage level and supply fast power to the IC when needed.

The second most common capacitor application is in filtering to remove signals at unwanted frequencies.

The manner in which a capacitor charges and discharges through a resistor can be exploited for various timing purposes, such as introducing a delay or changing the shape of a waveform.

Together with inductive components, capacitors can be used to build oscillators for generating accurate sinusoidal signals.

Different Materials and Applications of Capacitors

The differing properties of various capacitor technologies allow designers to select the optimum device type of any given application based on criteria such as operating voltage, required capacitance, device size, and frequency response. Other characteristics, such as aging (drying of wet electrolyte) causing loss of capacitance, maximum recommended operating temperature, flammability, and self-healing properties, are also important factors influencing device selection. In some cases, special low ESR devices that feature minimal parasitic resistance may be required, for example, to minimize power losses in high current applications.

Plastic film capacitors are non-polarized capacitors with an insulating plastic film as a dielectric. The dielectric films are drawn to a thin layer and are not destroyed by breakdowns or shorts between electrodes. The direct contact gives the films the advantage of having very short current paths. Has low leakage. Suitable for applications with high surge currents.

Film capacitors can operate at relatively high temperatures, have high insulation resistance, have good stability, and are available in tolerances as tight as 0.5%. The self-healing property of metalized films is useful in some applications, where surge voltages might happen occasionally. Three main construction techniques are used: wound foil, metalized film, stacked film.