The logic diagrams for these two functions are:

Wiring diagram for logic equation A ⊕ B: 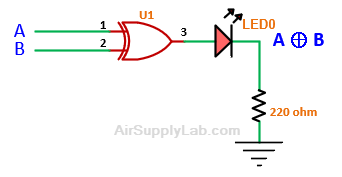 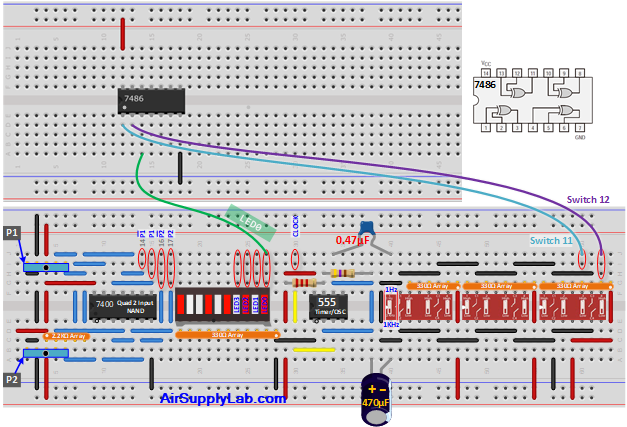 Here is the wiring diagram for the logic function AB + AB:

For each chip connect the power pin (pin 14) to VCC (+5V) and the ground pin (pin 7) to GND (0V). Next, connect all of the wires as shown in the wiring diagram. For example, connect pin 2 of U1 to pin 1 of U2. To keep track of which connections have been made, after you connect two pins with a wire, place a small checkmark on that wire in the wiring diagram. It is also a good idea to place a checkmark next to pin 14 and pin 7 in the power and ground table after you connect each to VCC and GND, respectively.

Draw the wiring for the XOR gate circuit in the following diagram. 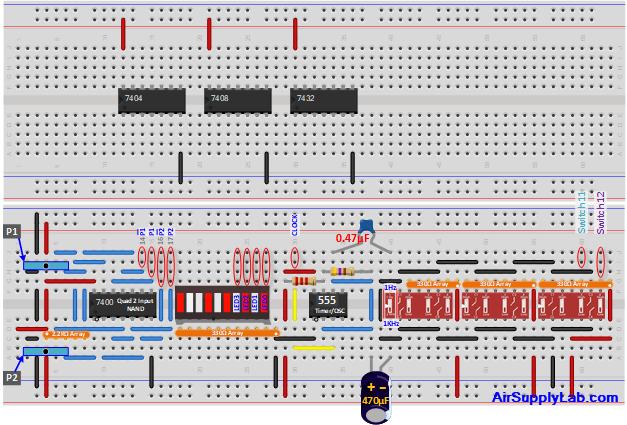 Draw the wiring for the XOR gate circuit in the following diagram.

Note: there is a problem drawing wiring diagrams as discussed above. You must constantly refer to the KB03: TTL IC Specifications or else go online to find each chip's pin numbers and then to place them in your drawing. Instead, you can use a circuit-drawing program called ExpressSCH. (SCH stands for "schematic", meaning a circuit diagram). It allows you to place and connect symbols for gates and chips in your diagram that contain all pin numbers plus Vcc and ground (so a Vcc-ground table is no longer needed).

Once you draw a circuit with this tool, it is all right there. (You may want to print it out so you can check off connecting wires as you install them.) The program is available on the lab PC's plus you can download it from the web for free. Refer to the KB04: ExpressSCH Tutorial for all instructions on how to download it to your computer and how to use it. It is of real benefit when wiring up your circuit to have your diagram on the PC screen, complete with pin and U (unit) numbers.

Rarely will a circuit work the first time it is built? Inevitably there will be mistakes, also known as "bugs", either due to incorrect design or a mistake during wiring. In order to find the mistake, you need to troubleshoot or "debug" your circuit. For a combinational logic circuit here are some steps to debugging a circuit:

There are two keys to being successful in troubleshooting your design. First, you must understand how your circuit is supposed to behave. Also, you need to have a good understanding of the behavior of each logic gate, hence the importance of Lab 3.

The circuits shown in the following debugging session have been drawn using ExpressSCH. Notice how gates from different chips show different U numbers and how pin numbers are included automatically. Once you are familiar with ExpressSCH, you'll see how much more efficient it is to draw your circuits.

Step 1: with the bug, the circuit will generate the output values shown in the following truth table under Actual Value, instead of the correct values shown under A ⊕ B. There are two input combinations that generate the incorrect results shown in bold. From the values in the Actual Value column, it shows that the expression for the output of the circuit is now just A.

Step 2: for input combination, 00, the correct output value should be 0, but a check with your logic probe at the output of U3 (OR) will show it is 1. We start troubleshooting (debugging) by working backward from the output gate using the logic probe. The triangular symbols (red=1, green=0) represent the LED indicators on the logic probe. As you proceed, record the 1 and 0 values on your diagram.

Assuming there are no electrical (as opposed to logic) problems with your circuit, problems like a bad chip, or one with no connection to Vcc or ground, or a broken wire, the following approach may save time since it doesn't involve poking around inside the circuit with a logic probe as in the previous example. It just requires adding a column to the original truth table with output values found when testing the actual circuit. We'll use the table for the XOR circuit shown at the top of the previous page to illustrate this.

The 1's in the Actual Values column lie in the first two rows where A = 0. So we could say that the circuit output is simply A. But this implies a circuit with no AND and OR gates — very different from the XOR circuit. In order to compare the two, we want the same structure for each (i.e. two inverters, two ANDs, and an OR). So, instead, we write separate AND expressions (product terms) for the first and second rows in the Actual Values column and combine them as shown:

We can see right away that the problem is the underlined A which should be A. In other words, the wire into pin 4 of the lower AND should come directly from the A and not from the output A of the upper Inverter. Problem solved.

Let's think about this circuit. If two or three inputs are 1, output V will be 1. Otherwise, it will be 0. Verify that your values for V in the truth table agree with this definition. If so, then we can determine a logical expression for V; i.e. V = AB + BC + AC. We can verify that this is correct by showing that the truth table for V and for AB + BC + AC are the same. Complete the truth table below to prove that these two functions are the same, and record it in your report.

Assuming that you were lucky and wired your circuit properly, you haven't had a chance to practice your debugging skills. In this section, you will each take turns inserting a bug for your partner after which your partner will troubleshoot the circuit. Follow the steps shown in Exp #4.2 to debug your circuit. Document your process as shown in Exp #4.2 in your lab journal. Demonstrate your debugging technique to your instructor.