In the embedded system design, the system needs to check the input state and then send signals to other devices, or change the state of the outputs. Since each GPIO pin is connected to a different device (some pins are input and other pins may be output or other functions), it is not possible to check the pin state by comparing with a constant value. The setting, clearing, and toggling pins also have the same situation: constant values can not be assigned directly to the port DATA register. Because each GPIO pin is associated with the corresponding bit in the port DATA register, a bitwise operation can be used to solve these issues. 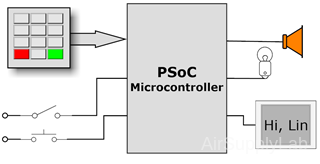 Write the following definitions in a header file, such as MyDefines.h. Then includes the file in your project. 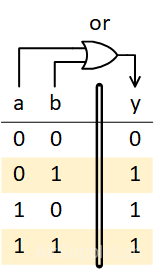 To turn certain bits on, the bitwise-OR operation can be used, following the principle that n OR 1 = 1 and n OR 0 = n. Therefore, to make sure a bit is on, OR can be used with a 1. To leave a bit unchanged, OR is used with a 0.

Example: Setting 1 on bit 5 and 3, the other bits unchanged. 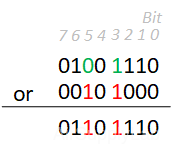 To light on the lamp which is connected to PB2, bit 2 of the Port B DATA register needs to be set to 1. The following expression shows how to set bit 2 to 1: 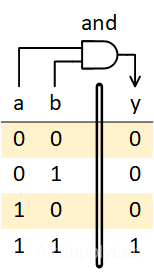 Example: Clearing on bits 5 and 3, the other bits unchanged.

To turn off the lamp that is connected to PB2, bit 2 of the Port B DATA register needs to be clear to 0. The following expression shows how to clear bit 2 to 0:

We just discussed how to turn bits on and turn bits off, but not both at once. Sometimes it does not really what the value is, but it must be made the opposite of what it currently is. In other words, toggling means that turns the bit on if it is off, and turning it off if it is on. This can be implemented using the XOR (exclusive or) operation. Therefore inversion of the values of bits is done by XORing them with a 1. The other unchanged bits can be XORed with 0, because n OXR 0 = n, just like an OR.

Example: Inverting on bits 5 and 3, the other bits unchanged. 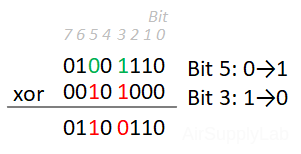 To toggle the lamp which is connected to PB2, bit 2 of the Port B DATA register needs to be inverted. The following expression shows how to invert bit 2:

Set bits to a value

To write arbitrary 1s and 0s to a subset of bits: first, write 0s to that subset, then set the high bits.

So far, you have already learned how to change the bit values. But now, suppose you want to determine the particular bit that is set or not. The following test does not necessarily work:

The Bitwise-AND operator (&) can be used to check the bit state. First, use bitwise-AND to AND PB with a bitmask value (The corresponding bit in bitmask must be set to 1, leaving other bits to 0). This produces a value that is 0 in all the other bit positions because 0 AND any value is 0. Only the bits corresponding to the 1 is left unchanged because 1 AND any value is that value. Therefore, if the result is zero, then the bit was off. But, if the result is any other value, then the bit was on. Figure 8 illustrates how this operation works.

The proper test is this:

For one-bit testing, programmers often simplify this test to the following:

For one-bit testing, programmers often simplify this test to the following:

For multiple-bit testing, you need to identify the correct value to compare with the result:

To read the current state of a pin into a variable, use the bit-wise AND operator to filter the corresponding bit. Since the pin state is a logic value, only two types of values, either logic 0 or logic 1; so the data type of the variable used to store the pin state can be set to a Boolean variable.

For example, the SW1 is connected to PB2. To read PB2 state into sw1 variable:

To check the sw1 state (connected on PB2):

The following functions get or set a particular bit of a variable that can make programs easier to read.

Program 1: SetBit() function to set a particular bot to 0 or 1

Get the Value of a Particular bit in an Integer Variable

Get the Value of a Particular bit in an Integer Variable

Program 2: GetBit() function to get a particular bit