I2C (Inter-Integrated Circuit), pronounced I-squared-C, is also called IIC (pronounced I-I-C), or I2C (pronounced I-two-C). The I2C was designed by Philips in the early '80s, and It is typically used for lower-speed communication between peripheral devices and microcontrollers in short-distance. For example, EEPROM, ADC, RTC etc.

I2C is a multi-master and multi-slave serial communication protocol means that we have the freedom to attach multiple IC at a time with the same bus. In I2C protocol, communication is always started by the master and in the case of multi-master, only one master has ownership of the bus.

I2C is basically a two-wire communication protocol. It uses only two wires for communication. In which one wire is used for the data (SDA) and the other wire is used for the clock (SCL). In I2C, both buses are bidirectional, which means the master is able to send and receive the data from the slave. The clock bus is controlled by the masters, but in some situations, slave devices may force the clock low at times to delay the master sending more data or to require more time to prepare data before the master attempts to clock it out. This is called "Clock Stretching" and is described in the protocol part.

All slave and master are connected with the same data and clock bus, here important thing is to remember these buses are connected to each other using the WIRE-AND configuration which is done by putting both pins as "open drain". Open drain means that the device can pull the corresponding signal line low, but cannot drive it high. Thus, the open-drain configuration allows I2C to connect multiple nodes to the bus without any short circuits from signal contention. 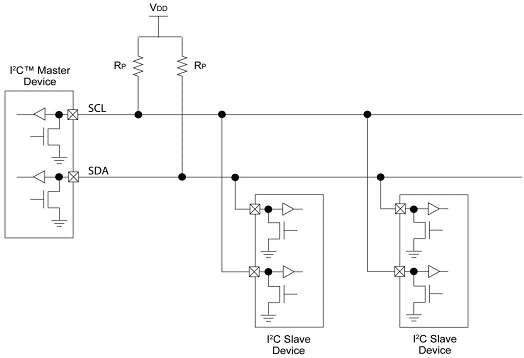 Figure 1: Basic Internal Structure of the Slave and Master Devices

Figure 1 shows a simplified view of the internal structure of the slave and master devices on the SDA/SCL lines, consisting of a buffer to read input data, and a pull-down FET to transmit the data. A device is only able to pull the bus line low (provide short to ground) or release the bus line (high impedance to ground) and allow the external pull-up resistor to raise the voltage. This is an important concept to realize when dealing with I2C devices, since no device may hold the bus high. This property is what allows bidirectional communication to take place.

I2C is a fairly robust protocol and can be used with short runs of wire (2 ~ 3 m). For long runs or systems with lots of devices, smaller resistors are better. 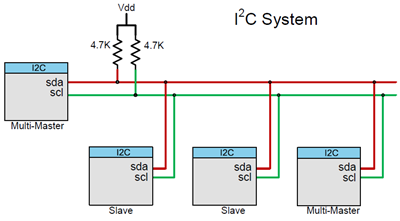 The above diagram shows a simplified equivalent circuit for an I2C connection between the masters and slaves. All I2C master and slave devices are connected with only two wires: serial data (SDA) and serial clock (SCL). Each device can be a transmitter, a receiver, or both. Some devices are masters – they generate bus clocks and initiate communication on the bus, other devices are slaves and respond to the commands on the bus. In order to communicate with a specific device, each slave device must have an address that is unique on the bus. I2C master devices (usually are microcontrollers) don't need an address since no other (slave) device sends commands to the master.

We know that the I2C communication protocol supports multiple masters and multiple slaves, but most system designs include only one master.

The I2C uses two signals: SDA and SCL. Both signals are bidirectional and connected via resistors to a positive power supply voltage. All the devices on the bus must use open-collector or open-drain pins. Therefore, when the bus is free, both signals are logic high. Activating the signal means pulling it down (wired AND) to logic 0. The number of the devices on a single I2C bus is almost unlimited  — the only requirement is that the bus capacitance does not exceed 400 pF.

The I2C is a serial synchronous communication protocol. Each clock just transfers one bit of data. The SDA signal can only be changed when the SCL signal is low, this means the data should be stable when the clock is high.

Data on the I2C bus is transferred in 8-bits. There is no limitation on the number of bytes, however, each byte must be followed by an acknowledge (ACK) bit. This bit signals whether the device is ready to proceed with the next byte. For all data bits including the ACKnowledge bit, the master must generate clock pulses. If the slave device does not acknowledge the transfer, this means that there is no more data or the device is not ready for the transfer yet. The master device must either generate a STOP or REpeated START condition bit.

The default state of the SDA and SCL lines is high. A master issuing the Start condition first pulls the SDA line low, and next pull the SCL line low. This puts all slave devices on notice that a transmission is about to start. The I2C bus is considered busy after the assertion of the START bit. If two master devices wish to take ownership of the bus at one time, whichever device pulls SDA low first wins the race and gains control of the bus. 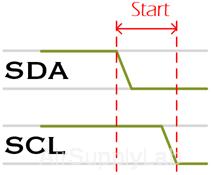 Once all the data frames have been sent, the master will generate a stop condition. The bus master first releases the SCL and then the SDA line. The I2C bus is considered free after the assertion of the STOP bit. 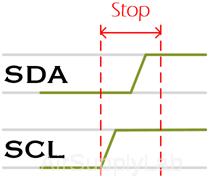 A Stop condition ALWAYS denotes the END of a transmission. Even if it is issued in the middle of a transaction or in the middle of a byte. It is "good behavior" for a master that, in this case, it disregards the information sent and resumes the "listening state", waiting for a new start condition.

A Repeated Start condition is asserted by the master when the bus master does not want to lose control of the bus. The repeated start is beneficial for the master when it wants to start a new communication without asserting the stop condition. 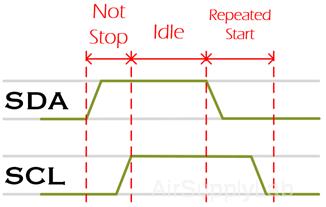 The repeated start is beneficial when more than one master is connected with the I2c Bus.

In this case, the slave device will execute what is referred to as "clock stretching". Typically, all clock is driven by the bus master. The slave simply places the data on the bus or fetches data off the bus in response to the master's clock pulse. At any time during the data transfer processing, the addressed slave can pull the SCL line low to pause the transaction. After the processing of the received data, the slave will release the SCL line high to resume the communication. 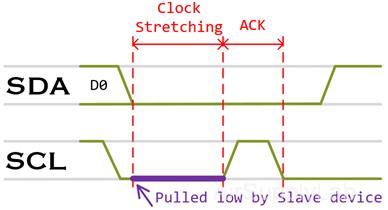 The arbitration is required in the case of multi-master, where more than one master is tried to communicate with a slave simultaneously. In I2C arbitration is achieved by the SDA line.

For example, if two masters in the I2C bus are tried to communicate with a slave simultaneously, then they will assert a START condition on the bus. The SCL clock line would be already synchronized by the wired and logic. 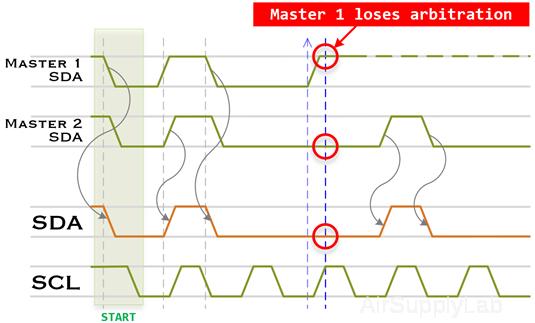 Master who is losing their arbitration will wait till the bus become free.

Each slave device on the I2C bus should have a unique 7-bit address, called slave address. The master device generates all the serial clock pulses and the START and STOP conditions bit. Data is transferred with the most significant bit (MSb) first.

In the 7-bit addressing format, the slave address is transferred in the first byte after the START condition bit. The bit[7:1] of the byte comprises the slave address, followed by a direction bit at bit[0]. The format is shown in the following diagram.

A seven-bit wide address space theoretically allows 128 I2C addresses – however, some addresses are reserved for special purposes. Thus, only 112 addresses are available with the 7-bit address format.

Two groups of addresses are reserved for special functions:

Q1: A master begins communication by transmitting a single start bit. How can the slave(s) devices differentiate between a start bit and a data bit?

A2: A stop bit is generated by changing the state of the data line (SDA) from low to high, again only while the clock line (SCL) is high.

A3: A bit of data is defined by a clock pulse. The data line must be stable during this period of time.

Q4: How many bits comprise a data packet?

Q5: How many slaves can be addressed by a master?

A5: The slave address (SLA) is 7-bit wide, suggesting up to 27 slaves. However, address is reserved, so in practice only 127 slaves may be addressed.

Q6: What is the bit ordering for transmitting both an address and data?

A6: Most significant bit (MSB) first.

Q7: What is the difference between a packet and a session?

A7: A single session is defined by the master sending an address (SLA-R/W) packet and reading or writing one or more data packets.

Q8: Once a slave decodes the 7 address bits and determines the master is talking to it, how does the slave know if the master is going to read data from the slave or Write data to the slave?

A8: After the 7 address bits, the master will transmit a read bit (SLA+R) or a write bit (SLA+W).

Q9: Once a slave decodes the 7 address bits and learns the direction of communications (SLA+R/W), it acknowledges (ACK) that it is ready by setting to zero the data line (SDA). This is the 9th bit in the address packet. How can the slave bring this line low without generating contention on the SDA line? In other words, how can both the master and a slave use the same line to both send and receive data?

A9: Each of the two wires (SDA and SCL), includes a pull-up resistor. A slave device writing to SDA only needs to pull the line low for each 『0』written; otherwise, it leaves the line alone to write a 『1』, which occurs due to the lines being pulled high externally by the pull-up resistor. This is commonly known as a wired-AND configuration. Here is a link where you can learn more about wired-AND and wired-OR configurations.

Q10: When the slave sends data to the master (SLA-R), the slave controls the data line (SDA), who generates the clock pulse?

A10: The master always generates the clock pulse.

Q11: If the master always generates the clock pulse, then why does the clock line (SCL) use an open-collector output configuration allowing multiple devices to share this bus line?