The signals of the natural environment, such as voice, temperature, light ... and so on, are continuous-time and continuous-amplitude variable (analog) signals. Analog signals have infinite states available. But, the computers we are using are digital signal systems. Digital signals have two states — on (1) or off (0). The analog signals need to be converted into a digital representation which can then be stored in a computer for further processing. An A/D Converter is a device that converts analog signals (usually voltage) obtained from environmental phenomena into digital format. In other words, ADC digitizes an analog signal by converting data with infinite states to a series of pulses. The amplitudes of these pulses can only achieve a finite number of states.

ADCs have the following key characteristics:

The full scale input of an ADC is the largest signal amplitude that can be delivered to the converter before the signal is clipped in its digital output representation.

The sampling rate is the frequency expressed in Hertz (Hz) at which the ADC samples the input analog signal.

The Nyquist Theorem (or Shannon Theorem) states that an analog signal with a highest frequency of fa MUST be sampled at a sampling rate fs > 2 fa to avoid loss of information.

There are two types of resolution in the A/D Conversion: bit-resolution and voltage-resolution.

The transfer function of an ADC is a plot of the voltage input to the ADC versus the code's output by the ADC. The horizontal axis represents a continuous analog input signal. The vertical axis shows the digital output codes which can be thought of as level for rounding off the analog input signal to its nearest digital equivalent. The full scale input range of the ADC is equally divided over the total number of digital output codes to transform the dashed red line to the staircase blue line as shown in Figure 2. 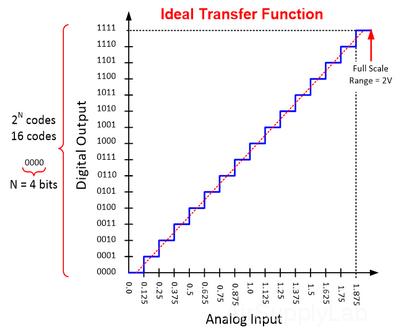 The number of bits is the number of binary digits in the digital output code used to represent the full scale analog signal. In this example, we have 4-bit or binary digits ADC, so N = 4, and the number of codes here is 24 = 16, which corresponds to counting from binary 0000 to 111 which is 0 to 15 in decimal, Here, we assume the output of the ADC is linear.

The A/D Converter samples the analog signal and then provides a quantized digital code to represent the input signal. The digital output codes get post-processed and results can be reported to an operator who will use this information to make decisions and take actions. Therefore, it is important to correctly relate the digital codes back to the analog signals it represents.

In general, the ADC input voltage is related to the output code by a simple relationship, as shown in Equation 1:

where Vm (V) is the ADC's input voltage or the measured voltage; Dout  is the ADC's digital-output code in decimal format, and VLSB is the voltage resolution or the value of the least significant bit in the ADC code.

Equation 1 is a general equation that can work for any ADC. It doesn't matter if the ADC's output code is in straight binary or two's complement format, as long as the binary number is correctly converted to its equivalent decimal value.

Q1: If the input voltage is 2.56V, what is the converted digital value?

A DC voltmeter is rated at 14-bit of resolution and has a full-scale input range of ± 5V. Assuming the meter's ADC is ideal, what is the quantization value?

Consider a thermocouple giving an output of 0.5 mV/ºC. What will be the bit-resolution required when its output passes through ADC; if temperature of 0 ~ 200ºC are to be measured with a resolution of 0.5ºC.

0.25 mV is the smallest input value which can produce 1-bit change in the ADC output. It is voltage resolution value of ADC.

From here, it is necessary to look at specific ADC architectures in order to determine the best ADC for the job. This includes:

SAR ADC is the most commonly used method. It has a smaller chip area, lower power consumption analog-to-digit conversion. It is frequently the architecture of choice for medium-to-high-resolution applications with sample rates under 5 mega samples per second (MSPS). Bit-resolution for SAR ADCs most commonly ranges from 8 to 16-bits. These features make the SAR ADCs especially suitable for following applications:

The SAR ADC basically implements a binary search algorithm. There are many variations for implementing a SAR ADC, the basic architecture is simple. The SAR ADC circuit typically consists of four chief sub-circuits, and it is shown in Figure 3. 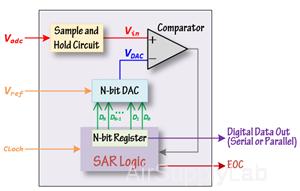 Basic Operation of the SAR ADC

The SAR ADC does the following steps for each sample: 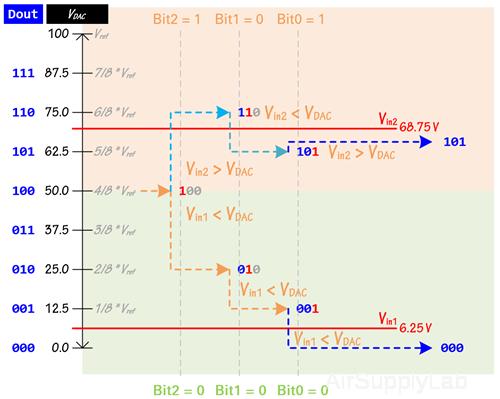 Notice that a 4-bit ADC requires three comparison cycles. In general, an N-bit SAR ADC will require N comparison cycles and will not be ready for the next conversion until the current one is complete. This explains why these ADCs are power - and space-efficient. 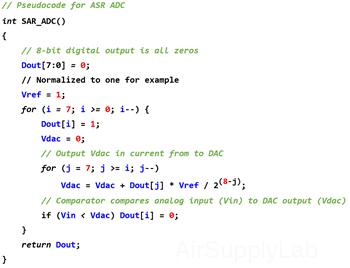 A flash ADC (also known as a direct-conversion ADC) is a very fast type of ADC that uses a linear voltage ladder with a comparator at each "rung" of the ladder to compare the input voltage to successive reference voltages. For n-bit A/D converter, 2n-1 separate voltage comparators are used in parallel, with each having the analog input voltage as one input. The resistor ladder steps down the reference voltage bit by bit and is applied as other input to each comparator. 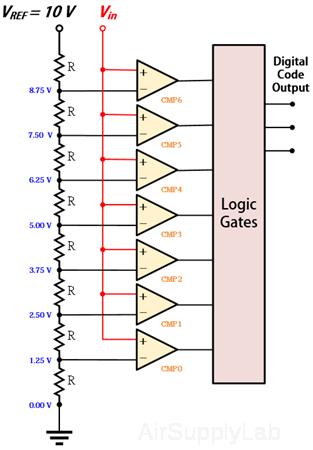 The flash ADC has the following advantages and disadvantages:

The Delta Sigma Analog to Digital Converter provides a low-power, low-noise front end for precision measurement applications. It can be used in a wide range of applications, depending on the resolution, sample rate, and operating mode. For example, The Delta-Sigma ADC can produce 16-bit audio; high speed and low resolution for communications processing; and high-precision 20-bit low-speed conversions for sensors such as strain gauges, thermocouples, and other high-precision sensors. When processing audio information, the Delta-Sigma ADC is used in a continuous operation mode. When used for scanning multiple sensors, the Delta-Sigma ADC is used in one of the multi-sample modes. When used for single-point high-resolution measurements, the Delta-Sigma is used in single-sample mode.